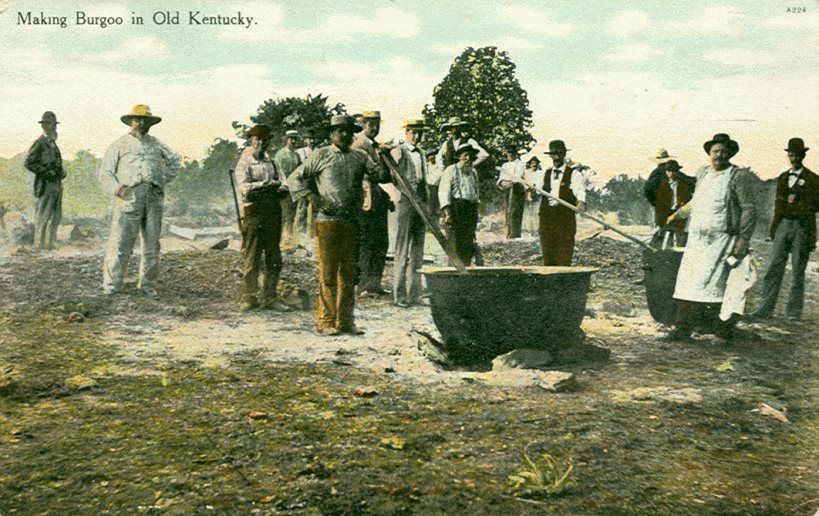 ”Go to your freezer. How much and what kind of fish and game do you have left in there from the previous summer and fall getting freezer burn? Write it down and subtract it as penance from your bag limit this summer and fall.“

You won’t need to heed Harrison’s admonishment if you make a big pot of Kentucky burgoo—a rich game stew long associated with early May. Burgoo is traditionally made in copious quantities; many old-time Kentucky burgoo cauldrons could hold 500 or more gallons of the slow-simmered stew. And although burgoo may not have been born at a Derby party, Derby parties burnished its legendary reputation. My late mother told me this story about the Derby burgoos of her youth:

The morning before Derby Day, the men would gather in a pasture at the edge of town and build a roaring hickory-wood fire. Over this, they hung an enormous black cauldron. As the men tended the fire, the townsfolk congregated in the pasture, and each man would add something to the pot—a squirrel or rabbit, perhaps, or maybe a chicken, or some pork or lamb. As the ladies passed by, they would each add something, too, from last year’s canned tomatoes and frozen vegetables to freshly harvested onions, potatoes, and peas.

The men tended the burgoo pot for the rest of that day and all night long, adding bourbon to it to deepen the flavor. They simmered the burgoo throughout the morning, until it was a rich dark copper color, and all of the meats were falling off the bone. Around noon, all the townsfolk would return, this time bearing tin cups, and enjoy a bowl of burgoo whilst engaging in lively debate about which horse would win that afternoon’sRun for the Roses.

I’ll bet, as well, that some wagering took place in that pasture that afternoon. And I’ll also go out on a limb here and postulate that not all the bourbon that the men told their wives was needed for the burgoo pot during its all-night simmer Derby Eve night ever made it there.

Ahhh, but making burgoo in May has its practical side, as well: Now’s the time to comb through your freezer for that about-to-expire game.

1 tablespoon sea salt, or to taste

10 to 12 cups vegetables (any combination of corn, lima

Preheat the oven to 325° F. Place the wild game in a roasting pan, drizzle with oil, and season liberally with salt and pepper. Add water or stock to about halfway up the meat and braise, covered, for several hours, until the meat separates easily from the bone, then set aside to cool.

Place the wildfowl and/or chicken in a 10-quart soup pot. Add enough water to cover, and bring to a boil over high heat. Reduce the heat to low and simmer for 45 minutes to 1 hour, until the meat easily pulls away from the bone.

Transfer to a plate, let cool, then debone. Cut the meat into chunks and add back into the broth in the soup pot. Remove the game meat from the bone, cut into chunks, and add that, along with the braising liquid, to the soup pot. Bring to a boil over high heat and add the tomatoes, root vegetables, onions, peppers, celery, and garlic. Add the bourbon, Worcestershire sauce, cane syrup, Tabasco sauce, salt, pepper, and bay leaves.

Tie the thyme, oregano, and sage together with kitchen twine and add this bouquet garni to the pot. Return to a boil, then reduce the heat to low, cover, and simmer for 2 to 3 hours.

Add the mixed vegetables and simmer for another 2 to 3 hours, adding water as needed to achieve a thick stew. Adjust the seasonings and remove the bouquet garni from the burgoo.

To serve, ladle into bowls and sprinkle each serving with parsley.

TIP: Burgoo traditionally comprises almost any wild game, as well as nearly any vegetable, so dig to the bottom of your freezer and the back of your pantry, and get cookin’! That lone squirrel from last fall, languishing in the bottom of your freezer? In it goes; ditto for the dozen dove breasts and venison shoulder you overlooked. The last few quarts of the previous summer’s home-canned tomatoes go in; with them, cabbage, potatoes, corn, peppers, onions, celery, garlic, turnips, lima beans, green beans . . . you get the picture.

Your burgoo should taste like the memories of the hunting season and harvest that just preceded it, so each one should have its own distinct personality—siblings, if you will, but not twins.