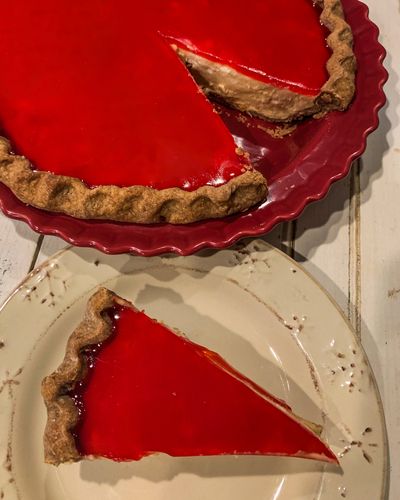 Peanut butter-and-jelly pie is a decidedly American concoction, and more than that, it’s a regional specialty proliferating across the South: Back before the internet, you could pick up nearly any Junior League cookbook from Virginia to Georgia, and find at least one recipe for this pie, and today, there are literally hundreds of recipes for peanut butter-and-jelly pie online.

In this recipe that I developed in homage to Texas peanuts, I strove to pull the recipe out of the Deep South, and give it a decidedly Texas flair with the addition of mesquite flour to the crust and a hand-harvested, homemade prickly pear jelly topping. Prickly pear tunas are just now beginning to ripen, so I hope you will harvest some and try your hand at making your own jelly—it’s divine!

I also worked hard to really lower the amount of sugar, and to create that luscious loft I recall from the “Cool Whip pies” with gelatin and organic whipped cream.

1/2 cup mesquite flour (I like the one from CappadonaRanch.com)

For the Peanut Butter Filling:

1 cup smooth organic peanut butter (ingredients listed on the jar should be only dry-roasted peanuts and sea salt; I pour off some of the accumulated oil at the top of the jar instead of stirring it in)

12 ounces prickly pear jelly (my recipe is on page 28 of my book, The Field to Table Cookbook)

Prepare the Crust: Preheat the oven to 400°F. Sift flours and salt into a medium-sized bowl. Cut in butter very quickly with pastry cutter or two forks until all butter chunks are pea-sized or smaller; add just enough ice water to make a firm dough. Press into a flat disk and chill for at least an hour or up to overnight. Roll out pie crust on a lightly floured surface and place in pan, then return to the refrigerator for at least 30 minutes. Gently line the pie crust with foil, and fill half-full with pie weights or dried beans. Bake until the pie dough is firm and just beginning to brown, about 15 minutes. Remove pie crust from oven and lift out foil and pie weights. Return pie crust to oven, reduce temperature to 350° F and bake another 15-18 minutes until golden brown. Let cool completely on a wire rack while you prepare the filling.

Prepare the Peanut Butter Filling: In a small bowl, whisk together the water and gelatin. Let stand 10 minutes. Meanwhile, in a medium, heavy-bottom saucepan, whisk together egg yolks, sugar, milk and sea salt. Cook, stirring constantly, over medium heat until custard thickens and begins to bubble. Remove from heat; add gelatin mixture. Whisk briskly until gelatin has dissolved and mixture is smooth. Whisk in peanut butter and vanilla. Cool to room temperature.

In a large bowl, beat the heavy cream with a stand or electric mixer on medium-high speed until stiff peaks form (tips stand straight). Fold about one-third of the peanut butter custard into the whipped cream. Gently fold in the remaining custard until just a few streaks of white remain. Gently spoon filling into cooled pie crust and smooth the top. Chill at least 3 hours or up to overnight.

Glaze the Pie: Melt jelly over medium-low heat just until it liquifies. Remove from heat, and let it cool a bit—you want the temperature to come down, but the jelly to still be pourable. Pour it all at once over the chilled pie, making sure it seals to the crust all the way around.

Store in a pie keeper in the refrigerator for up to three days; bet it won’t last that long!