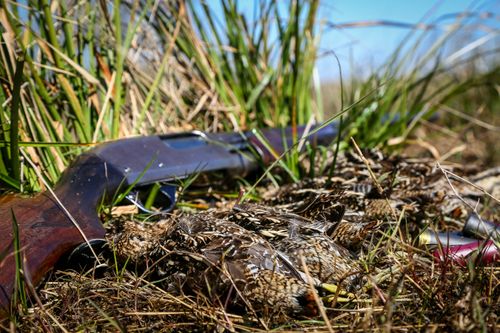 So long to snipe season

Snipe season just ended here in Texas on February 14, and although it began this past October 31, invariably we wait until after the close of duck season to hunt these delectable little morsels so as not to disturb ducks that loaf and feed in the same marshy habitat as do snipe.

Most folks — Southerners, at least — will either snicker or outright guffaw when you offer to take them snipe hunting: Seems being invited on a snipe hunt marked a rite of passage for many of us as children; led out into a field after dark, our somewhat-older-and-wiser siblings or cousins coached us with a whole set of elaborate instructions on how we should crouch in the moonlight, stock-still, holding an open gunny sack until the snipe ran into it … which of course never happened, much to the glee of our tormentors.

Not until adulthood did I learn that snipe really do exist; in fact, 2 million or so Wilson’s snipe inhabit North America. Wilson’s snipe (commonly called jacksnipe) present a challenge for even the most nimble wingshooters and, once roasted, its rich, dark flesh becomes a rare delicacy, perhaps inspiring the bird’s Latin name, Gallinago delicata.

Snipe, one of the few huntable shorebird species, can be identified by their rather absurd-looking chunky bodies, barred with variegated brown and black feathers, perched atop long yellow legs. A short-necked buff-and-brown striped head culminates in a long flexible bill, ideally suited to its purpose of probing the muck for worms, insects and seeds.

When snipe flush, they take flight in a ziggety-zaggety rush … bottlerockets on espresso!

With a daily limit of eight and a possession limit of 24, one can easily accumulate a surfeit of snipe—especially should my husband, who has hunted them in Southeast Texas’ marshes for more than a half-century, be among your number.

If you have just a few, they’re quite easy to pluck, but when we have a couple dozen or more, I paraffin them as I do ducks. Simply set up a large pot of water (I do this outside over a propane burner) with enough paraffin in it so that it makes about an inch-thick layer on top of the water when it melts. Hold the snipe by its beak and give it a quick dunk in the hot wax, then plunge it into a waiting tub of ice water. Once cool, crack off the wax and the feathers come off right along with it.

These, I wrapped them in thin applewood-smoked bacon, using the bird’s long beak as a skewer to pierce through the thighs and secure the bacon. They were smoked over cherrywood at 250 degrees F. for about 2 hours over a cherry-juice and thyme marinade, then served with a homemade cherry-chipotle barbecue sauce.

Take a stroll through the slideshow below for an overview of the process!