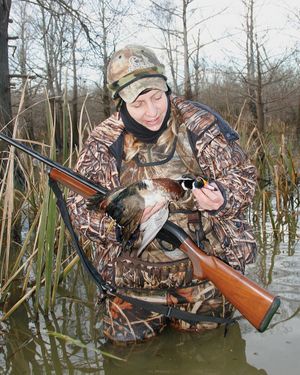 The Crown Prince of Champion Lake

I hear him before I see him, the distinctive “zee-zee-zee-zoo-EET” echoing in the flooded timber cathedral where I stand hip-deep in tannin-stained water, shouldered into a massive cypress’ shadow, shotgun raised, eyes skyward. My shotgun barks once, and down, down, he spirals through the ashen-gray branches, in stained-glass window colors of iridescent emerald green, royal purple, garnet, indigo, chestnut, and gold, slashed with a brilliant white.

I make my way to him, flooded with emotions: elation that I made a great shot, and a tsunami-force wave of remorse as I cradle his lifeless body. I begin to weep; I can’t stop. My husband—as he’s wont to do—stays at a distance in respectful silence as I struggle to compose myself, for he well understands the complex emotions coursing through me. I’ve shot hundreds of ducks; Shannon, more than 5,000. We eat a lot of ducks. Each one is special . . . yet, some are more special than others. As I clasp this wood duck to me now, I struggle to understand my emotional reaction to having shot him.

I know that wood ducks—the only perching duck in North America—present a challenge for USFWS biologists when it comes to population estimates as they reside primarily in riverine hardwood bottoms where aerial “pond counts” are impossible. Yet, biologists concur that populations are either stable or increasing, earning wood ducks a conservation status of “Least Concern,” which is great news for a species threatened with near extinction at the dawn of the nineteenth century. Manmade nesting boxes—wood ducks are cavity nesters—have played a significant role in this bird’s recovery. Wood ducks make excellent table fare, dining on seeds, fruits, aquatic grasses, and fat-rich acorns . . . all in all, a plentiful, tasty duck.

So what’s my problem, I wonder? And it’s this: He’s too integral to my forest, an icon, the crown prince of the cypress swamp. I want all my memories to be of him alive, streaking and juking through treetops, neon colors flashing—not lifeless in my hand.

Is it “wrong” to shoot a wood duck? Heck, no; and it’s perfectly legal. Abiding by the law goes with the responsibility of hunting. Beyond that is a big murky gray area where one’s own personal ethics kick in—or should—every time we decide to pull the trigger. And sometimes—such as this time—after pulling the trigger on a perfectly legal and good shot, we say as I do now, “Well . . . I’ll never do that again.”

A wood duck. My first. My last.

He’s plucked, dressed, vacuum-sealed, and stashed in the freezer . . . awaiting a special occasion worthy of his final appearance gracing our dinner table where, with reverent thanks to the spirit of the cypress swamp, his flesh will become our own.

I like to save beautiful, fat ducks such as these long after the close of duck season, as they are imbued with memories of the hunt and anticipation of the seasons to come. Breast-shot ducks and ones chomped on by an overzealous retriever will be what I choose to cook first. Similarly, we’ll dip into the ground venison now, and save the prized cuts to be savored later. 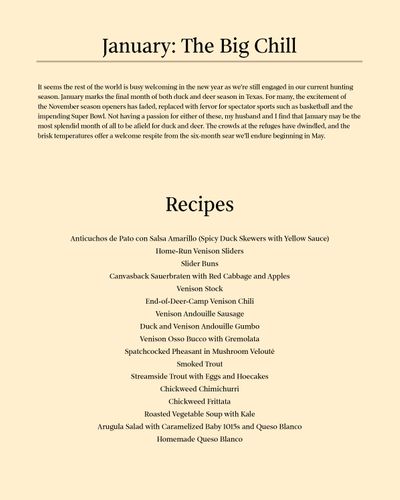 The Anticuchos de Pato con Salsa Amarillo (spicy duck skewers with yellow roasted pepper sauce) makes for a showy, easy, and toothsome appetizer, as do the Venison Sliders. For heart winter fare, you’ll find Venison Chili, a Canvasback Sauerbraten, a Duck and Vension Andouille Gumbo (with a recipe for your own venison andouille), and a rich Vension Osso Bucco,

For more formal fare, why not kick things off with a whole smoked rainbow trout, followed up with a spatchcocked pheasant in a wild mushroom velouté?

All here—along with wild winter greens and winter garden produce.